Home>News>Embedded floors with LLENTAB structures in a hall for the global leader in electron microscope manufacturing.

Embedded floors with LLENTAB structures in a hall for the global leader in electron microscope manufacturing.

LLENTAB embedded five different structures in a hall next to the existing manufacturing facility of FEI Czech Republic, the global leader in electron microscopy, in Brno in the second half of 2017. The structures are an extension of FEI’s production plant while providing new office, training and sanitary space as well.

The Czech Republic has become an electron microscope manufacturing superpower. Three production plants located in Brno accounted for about one-third of the global electron “eyes” output back in 2015. The country’s dominance in the segment has further grown since then. Quite likely the world’s biggest electron microscope manufacturing plant was built in Brno with a FEI Czech Republic investment of 700 million crowns to increase its output steadily. FEI Czech Republic has been operating in Brno since 1993. Thermo Fisher Scientific, a global leader in analytical and inspection lab equipment, acquired FEI the microscope manufacturer and with the entire US-based FEI group present in many other countries in 2016. Thermo Fisher Scientific’s high-end analytical and lab equipment, software, services, consumables and reagents help users addressing complex problems in their work. The primary customers for its products including microscopes are the premier universities, major pharmaceutical firms and development centres for the space, semiconductor, mining, automotive and aircraft industries. Thermo Fisher Scientific also brought many development stimuli, including the new capital project just being completed, which LLENTAB took a major part in.

Since the beginning, the project involved interesting structures in a completed reinforced concrete hall. These technology park halls are basically shells that protect the interior from the weather, offering investors large interior spaces in terms of both floor area and height. Embedded structures are a logical solution because they use the high vertical clearance and increase the utility through adding multiple levels. To a certain extent, they are also a necessity since the existing halls are often not rated for high floor loads required by all types of installations. The project required the coordination of many briefs and tasks. It evolved on the go in many respects. There was a long discussion as regards the required useful load for which the structures were to be rated. The useful load had to be defined so as to be sufficient without unnecessarily hiking the price of the structures and foundations. The steel structures LL 01 and LL 05 made a light yet high-capacity ceiling for the manufacturing space where all required installations can be suspended. The structures LL 02, LL 03 and LL 04 support the floors with high useful loads, allowing the floors to be fitted with large machines and equipment with no problems. Similar to a building set, the LLENTAB system is suitable for these types of projects with its variability, light weight and rapid deployment.”

The five new embedded structures using the LLENTAB system are part of a major extension of the aforementioned manufacturing centre in Brno. The supply process was divided into two phases; the first involved the completion of the manufacturing space (LL 01 and LL 05) and the sanitary and technical background (LL 02 and LL 03), and the beginning of the dual-level office and training centre (LL 04). The investor was concerned about using standard diesel engine vehicles whose emissions could pollute both the hall being modified and the adjacent hall with non-stop electron microscope production, which requires extreme cleanliness. The new steel structures had to be rated to support massive water, utility and ventilation installations. Of course, all that influenced the difficulty of project preparation and implementation.

The project was complicated in terms of both scope and quality. Designs had to be modified and extra work emerged at all times during the implementation, posing extreme requirements for the coordination between the investor’s and our designers, the manufacturing of LLENTAB structures and the installation teams. We were also concerned about the vibrations that the assembly of a steel structure generates that could affect the investor’s adjacent production facility. In the end, everything worked out fine and the majority of the project has been successfully completed. All that is left to do is installing soffits in the manufacturing spaces and completing the first phase of the office and training centre project. We should hand everything over completed in December 2017. I have to commend the investor’s approach; aware of the project’s difficulty, they approached it in a very responsible and business-like manner, allowing us to efficiently complete the project to everyone’s satisfaction. 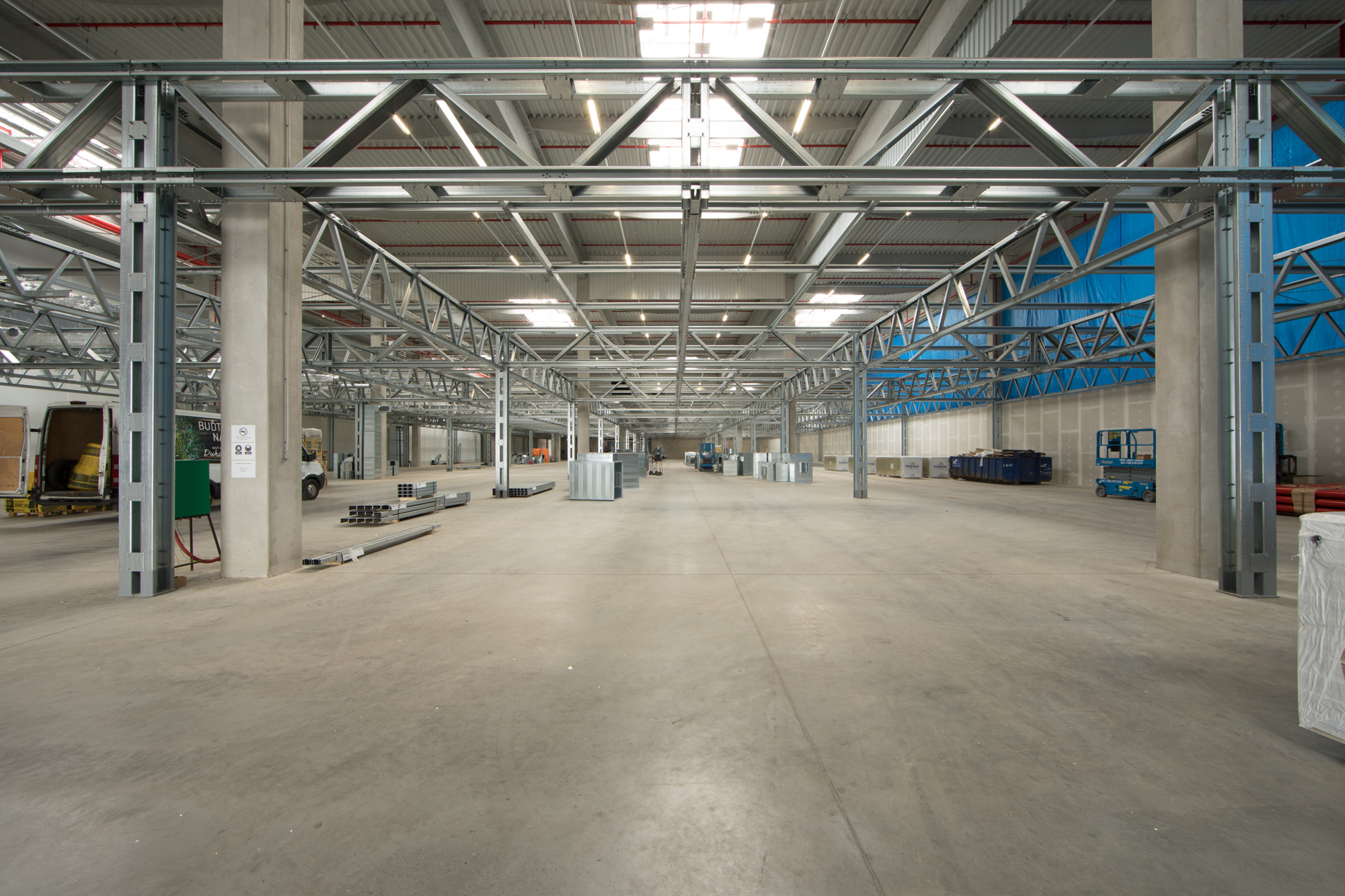 This facility will house manufacturing equipment and the corridors for water, electricity and ventilation mains. It is 108 m wide and 48 m long. The interior vertical clearance is 4.25 m. The embedded structure uses the HHR8 design, which is a hall with a horizontal roof, horizontal bottom strip and eight inner pillars, each made of two C-profiles. The pillars are arranged in a grid with a 12 × 12 m module and with double-hinged foundations. Trusses are installed with a spacing of 6 m and every second one is fitted onto lengthwise girders. The trusses and the girders form a spatial truss pillar structure. The stability in both directions is ensured without using braces. The total useful load of the embedded structure is 170 kg/m2. In addition to this load, several 500 kg hoists are suspended below the structure, as is one utility corridor (multiple mains concentrated into one axis) with a load of 700 kg/m2. 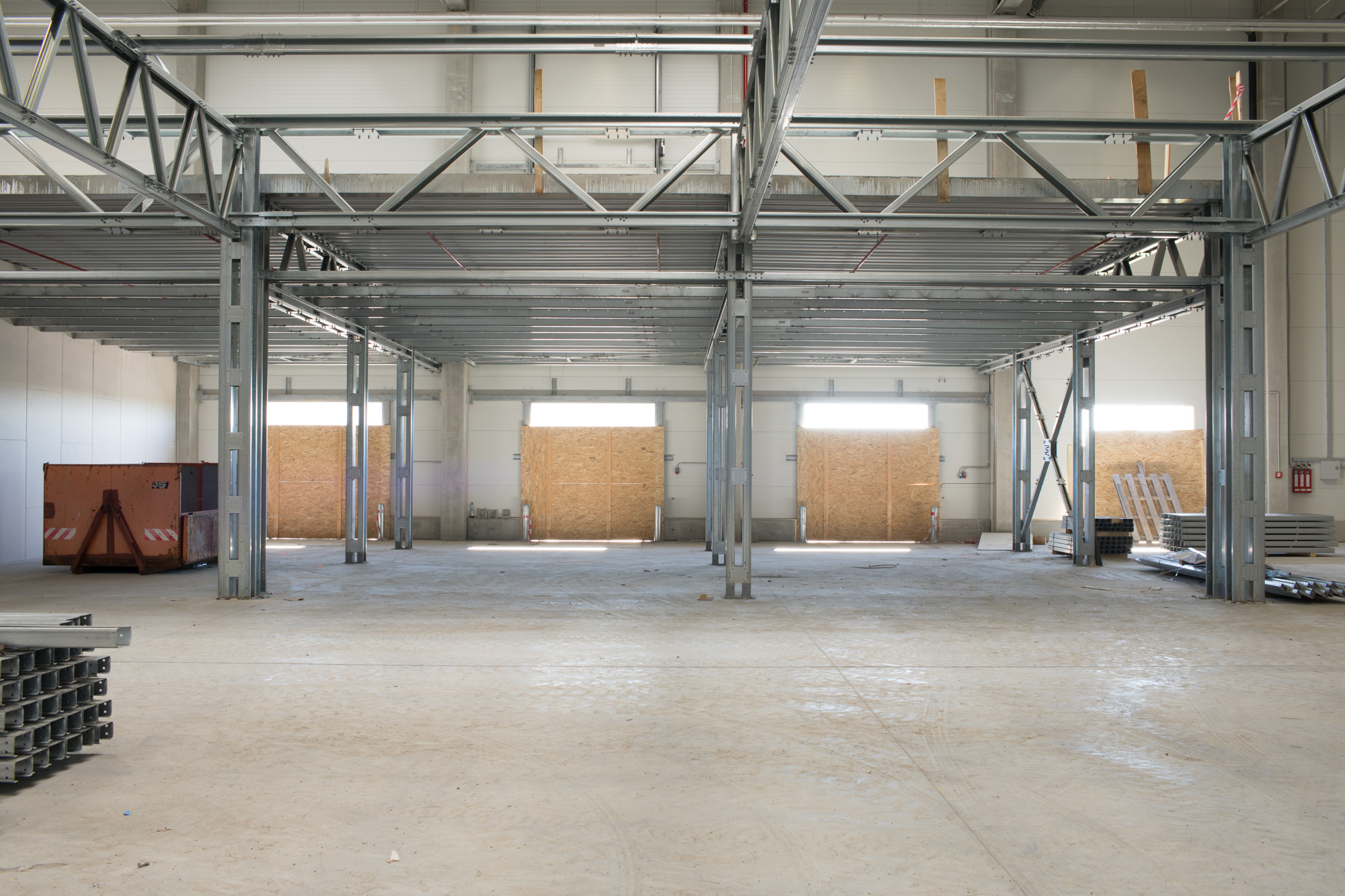 The LL 02 will house sanitary facilities for workers on the ground floor and the ventilation system engine room on the first floor. It is 68.1 m long and 6 m wide. The interior vertical clearance is 3.7 m. Beams are installed with a 6 m spacing. The HHR1 design is used. The truss pillar structure of the frames supports a load-bearing reinforced concrete slab cast into sacrificial formwork of trapezoidal sheets. Braces provide stability and rigidity. The slab forms the engine room floor. The useful load of the engine room is 500 kg/m2. 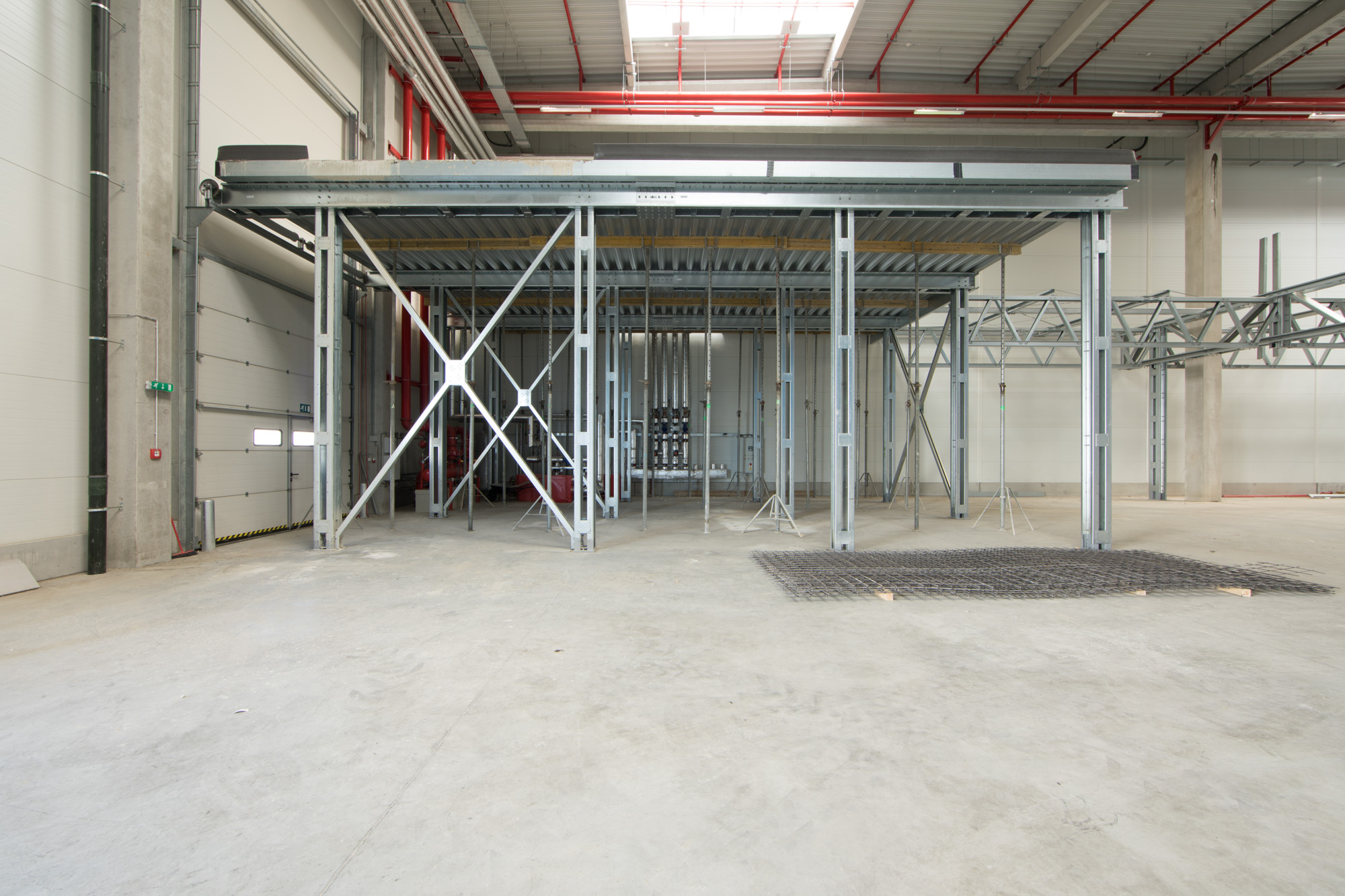 The LL 03 with background equipment is sized 10.3 × 14 m (length × width) and its interior vertical clearance is 5.3 m. The steel structure used is the HHR2 design. It is similar to the LL 02, the only difference being that truss pillar structure is not used for girders. Once again, the reinforced concrete slab forms the floor with useful load of 500 kg/m2.

Once completed, this embedded structure will provide office and training space. It is 73.3 m long and 11.9 m wide, the floor on the 2nd above-ground level is at 4 m high and the 3rd floor is at 8 m high. The structure makes up a load-bearing level and is being built over two phases. The majority of floor on both levels is rated for a useful load of 250 kg/m2 plus loading due to partitions. One half of the second floor is rated for an increased useful load of 500 kg/m2. The floor with the higher useful load utilises a load-bearing reinforced concrete slab and the floor with the lower useful load uses a system with ceiling beams and structural trapezoidal sheeting. The stability in both directions is provided using braces. 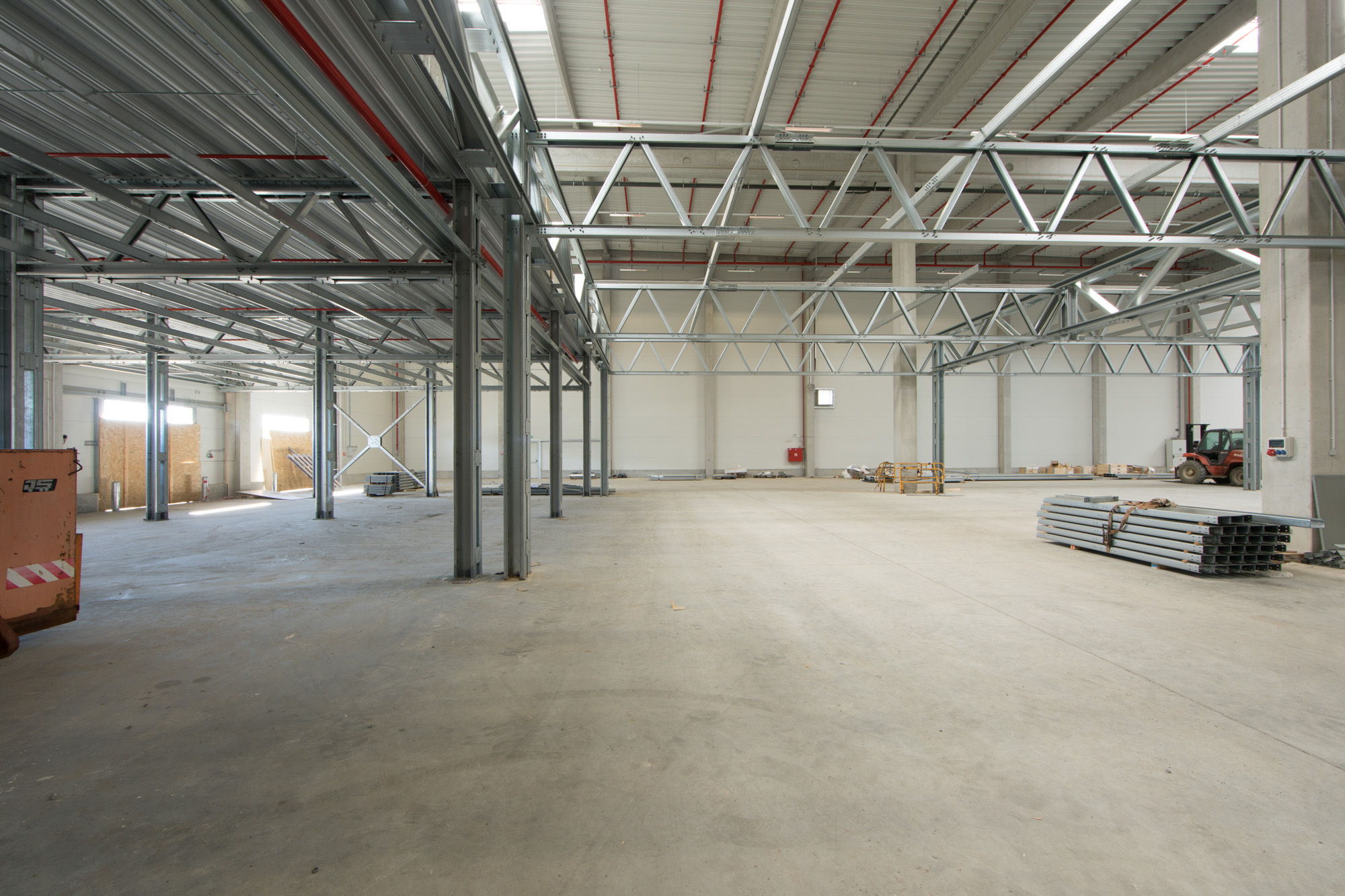 This facility will house another FEI production line. It is 24 m long and 60.4 m wide, with internal vertical clearance of 4.25 m. The system utilised and the load rating is the same as with the LL 01. Both facilities are connected and structurally dependent. The supporting structures of all five facilities use hinged foundations and the steel structure elements are made of galvanised steel. The internal environment of the existing hall with the embedded structures is expected to have corrosive aggressiveness rating of C2 and the internal environment of the embedded structures can even be rated as C1.

LLENTAB has been a highly professional partner that has been tremendously helpful during the demanding project. The project was difficult since the very beginning. While we had a hall with about 12,000 m2 of space, it had been designed for storage and not for manufacturing. The reinforced concrete carcass of the hall could not be used in any manner since it was rated so that it could not bear any additional loading. The steel fibre-reinforced concrete floor of the hall was thin and could not support concentrated loading. The pillar raster size required by our manufacturing processes was a given and could not be less than 12 m, which is quite a distance – considering the necessity of installing various equipment above the embedded clean spaces that are a must for the production of microscopes and/or other products to be made in the new facilities. We examined various vendors’ structural systems until we came across LLENTAB’s production range, which we found interesting and highly suitable for our project. Then we had to address one more issue – transferring very high pillar pressure to the subsoil. This is where we found out about the concrete injection technology and addressed one of the leaders in the field, SOLETANCHE. Beneath each one of the 144 pillars, we made core holes with a diameter of 15 cm, ensuring the minimum possible disruption of the existing floor. Concrete was injected through the holes and reinforced the subsoil so that it can support the loading from the steel pillars. By this time, we were working closely with LLENTAB technicians who promptly provided the calculations and data required for the substructure to be completed without undue delays. The actual structural system by LLENTAB was tailored exactly to our requirements. Truss pillar elements proved to be the best structural approach for the required 12 m span of the grid. The individual elements of the trusses and pillars are thin-walled, cold-rolled and made of high quality steel. This also makes them quite lightweight, which is exactly what we needed. In addition, the entire structure is galvanised, which is also important from the viewpoint of the cleanliness of our production facilities. We admired LLENTAB structural engineers who have mastered the methodology for rating thin-walled structures and the specificities of these designs. It is not surprising, then, that LLENTAB clearly won the tendering process involving several firms. I would like to use this opportunity and extend many thanks from the Brno team – and not just the investment one – to LLENTAB. 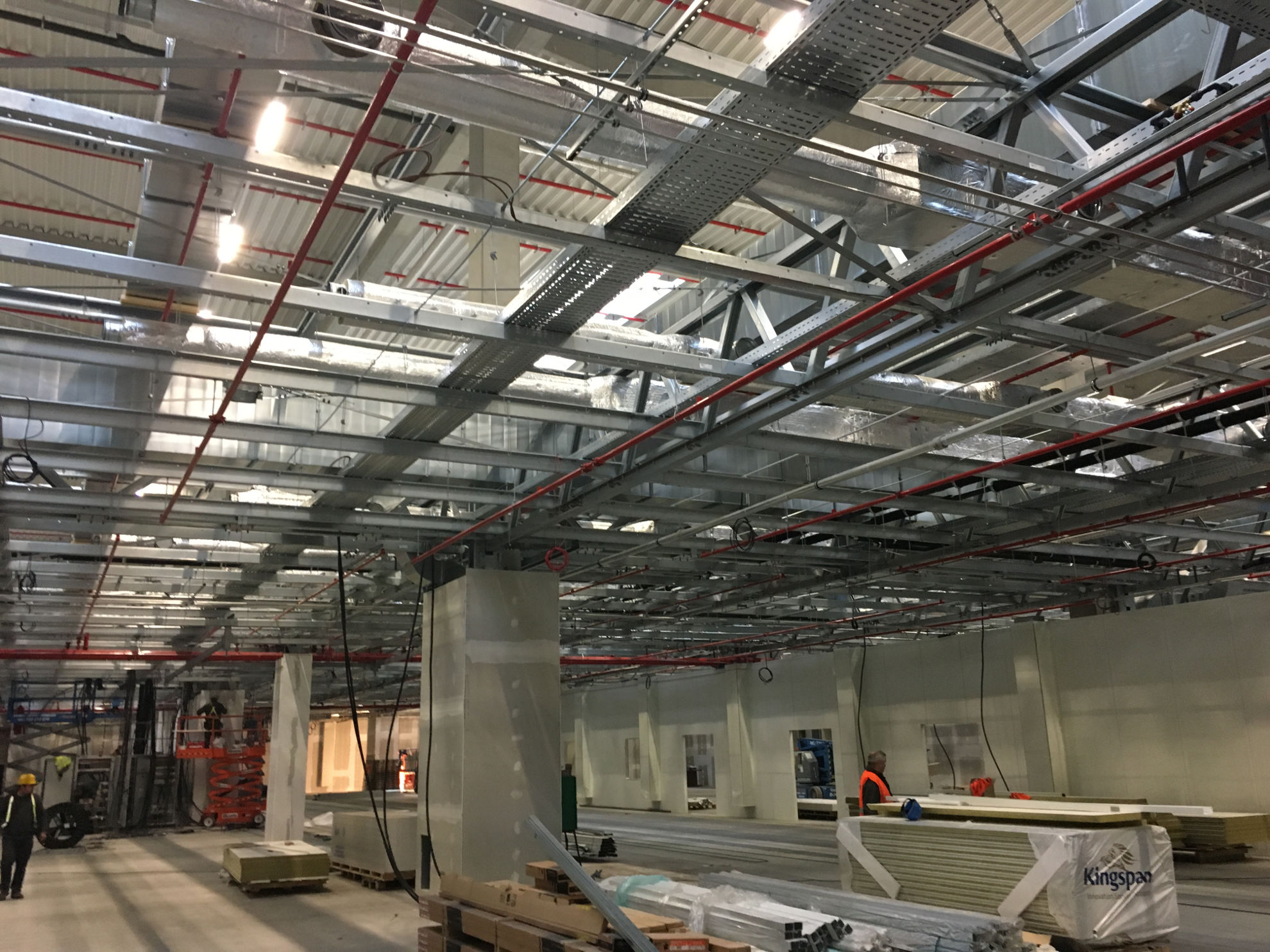 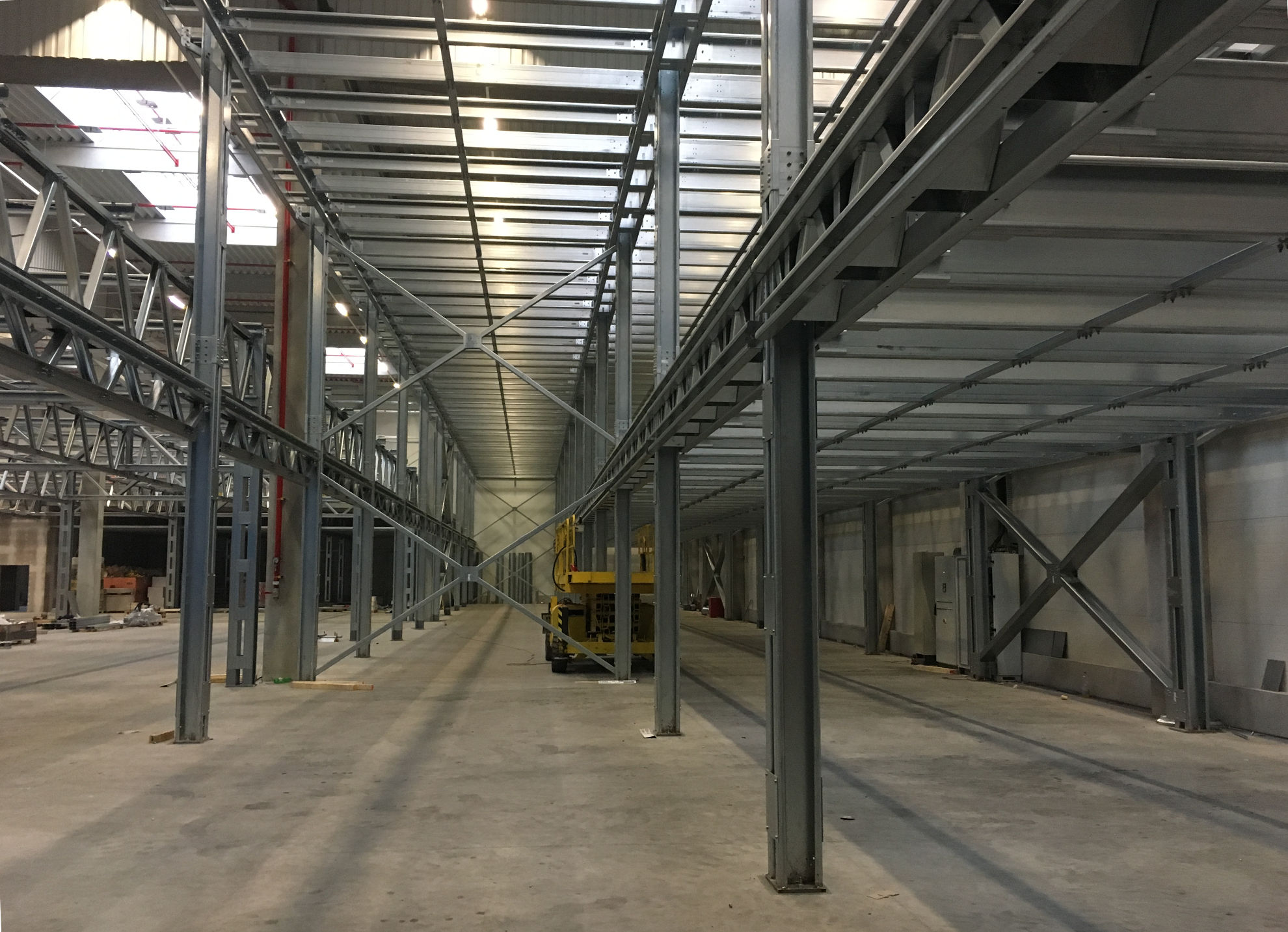 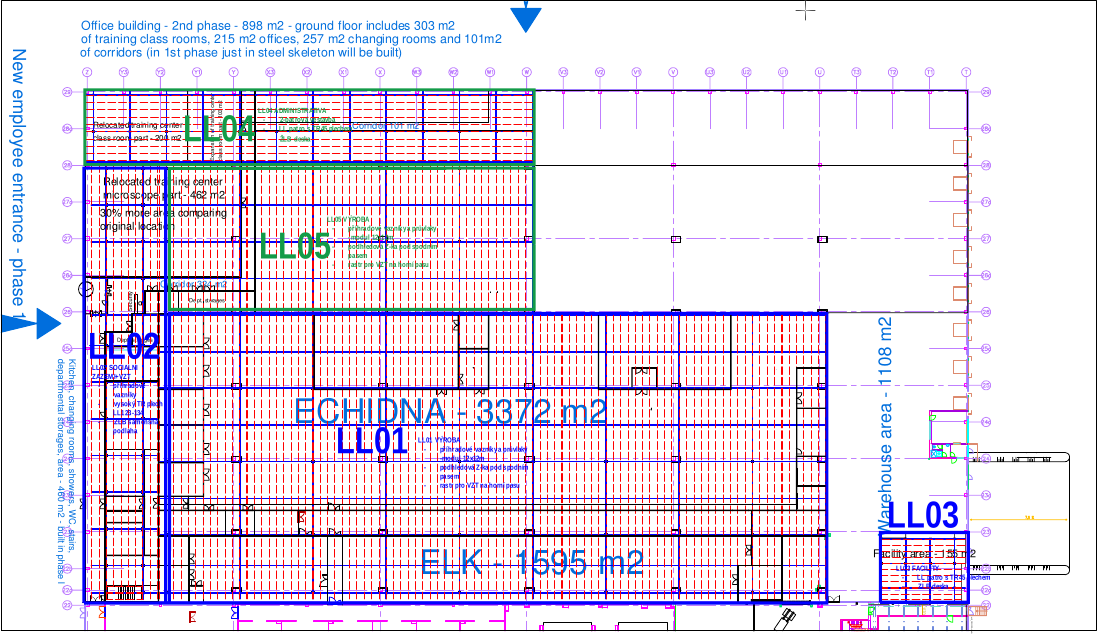