Home>News, Sports buildings>Swedish steel halls are having a positive influence on the health and the successes of the top football

Let’s begin with a few statistics and figures. Based on the number of active players, football is the absolute number one sport in Sweden. For all that, however, professional football is played by a relatively small number of players in the country by European standards; in total, there are around a quarter of a million players, of whom almost one quarter are women. Despite the small player base, the Swedish national football team has been in the TOP 10 European countries (according to FIFA rankings) in recent years. This is an exceptional success given the strong competition and the popularity of football in the world and in Europe, Europe’s UEFA now has 55 member states. As the rest of this article will show, this is not a matter of chance or luck.

Artificial turf and indoor halls are essential in Sweden

Discussions and planning are currently going on in many municipalities in Sweden when it comes to implementing investments in indoor halls and football grounds with artificial turf. As was recently confirmed in a joint statement issued by the President of the Swedish Football Association, Karl-Erik Nilsson, and Lars Ekholmer from the Swedish Football Association’s Construction Committee, “Artificial turf and indoor halls are absolutely essential for Swedish football“. Analyses of and the development of indoor halls and artificial turf have contributed to the fact that an increasing numbers of players now have the opportunity to exercise football all year round. The sports grounds are not only for training but also for regular football matches.

“The strategy is mainly about enabling more people to exercise more sports. This applies to both younger and older people. A large number of studies completed in Sweden shows on the importance of movement and at the same time warn about the consequences of an absence of movement in young age. Physical activity is good for learning and for human health. When you think of football, it is 22 players chasing and handling a ball, thousands of people watching it in the stadium and millions on television. Fine, but why should we invest in artificial turf and indoor halls? Without these investments, the Swedish football will have a hard time to fulfil their part of the sport’s strategy, gaining more players and in the end, contribute to the health of the Swedish population.

A recent Danish study showed that football is better for you than jogging, interval training or weight lifting because of its impact on muscle mass, fat content in the body and the strength in the skeleton. Nearly everyone can play football at any time – it is not necessary to be in good shape for football. In cooperation with UEFA, the Swedish Football Association has presented the results of the SROI study (Social Return on Investment), which shows a very effective return on investments in a wider football movement. The study shows that the benefits from football contribute to economic, social and health impacts amounting to 23 billion Swedish kronor. One Swedish krona invested in the football movement brings a return of up to ten kronor.

In addition to its marketing partners, the Swedish Football Association (Svenska Fotbollsförbundet – SvFF) also has its own “construction team”. Its members, which includes LLENTAB, are companies who create, maintain and develop Swedish football Arenas. The football association is not the only partner with which LLENTAB cooperates within Swedish football. The main partners are municipals, individual football clubs or a combination of both, which start up the process to build indoor football halls. The reason for building the football hall is to provide the players with a possibility to training or playing even during the period when the weather in Sweden does not allow this.

Sollentuna, a city with 70,000 inhabitants, decided to build a new indoor football hall. Sollentuna did not only build the new hall in a suburb to Sollentuna – Norrviken, but they also operate it with the goal of supporting all football activities. The local football club FK Sollentuna did also make a financial contribution to the building of the Hall. The work started in January 2017 and it took six months complete. The goal with the new Hall was to reduce the pressure on other halls in the municipality and at the same time lead to the further development of the sports centre in Norrviken. The Sollentuna football hall offers a complete sports facility for football; the football field dimensions is 103 x 63 m and it can be divided into two or four smaller parts with sliding walls. The dimension of the hall is 110 x 70 metres and the inside height is 14 metres. The Norrviken football hall is currently being fully utilised. The investment has fulfilled its main goals, to develop the sport centre in Norrviken and to increase the possibility to train football and other sports all year round irrespective of the weather.

Strength was the key factor

LLENTAB built the hall as a sub-contractor for the ERLANDSSON BYGG construction company. The hall had to have a very strong steel structure and the high-strength steel was ideal for the building’s wide dimensions. The structure provided by LLENTAB meets this requirement. LLENTAB designed, produced and installed the entire solution for the hall in Sollentuna, including the walls and roof, the doors, the windows, and the gates. To create a uniform internal climate LLENTAB used Insulated sandwich panels, while the load-bearing structure from high-tensile steel profiles came from the company’s own production unit in Kungshamn. LLENTABs entire solution required approximately 20% less steel than a corresponding solution from competing suppliers. The lower material consumption was also better for the environment and had a positive impact on the price.

LLENTAB is now building another new football hall in Borås

Borås is home to the successful football club IF Elfsborg, which has been playing its matches at the Borås Arena since 2005. The investor in the football stadium, Borås Arena AB, is now also investing in the new indoor football hall, Borås Arena AB, which is a subsidiary of the IF Elfsborg are doing this investment together with the municipal who is the guarantor of the project. Besides Elfsborg the Swedish Football Association and UEFA support the building of the hall. The construction of the new hall started in October 2018 and the LLENTAB structure should be finished in January 2019 and will be ready for use at the turn of February/March 2019. Once completed, it will provide facilities for all teams within IF Elfsborg and for other clubs in the surrounding area. Elfsborg is the first club in the Swedish football league (Allsvenskan) to build a new indoor football arena using its own investment company. Other football clubs have copied the Elfsborg model with the goal of turning the football facility into a new economic resource for the club.

Sweden can be an inspiration for other countries

Being jealous of the ideal conditions for football, which exist in southern European countries such as Spain, Portugal, Greece or Turkey, does not lead anywhere. The example of Sweden shows that you can play football on equal terms just that it has to play it indoor during the coldest period of the year. Giving young players the possibility to train and develop their skills the year around may make it possible for the Swedish national football team to keep their international ranking in the future coming … 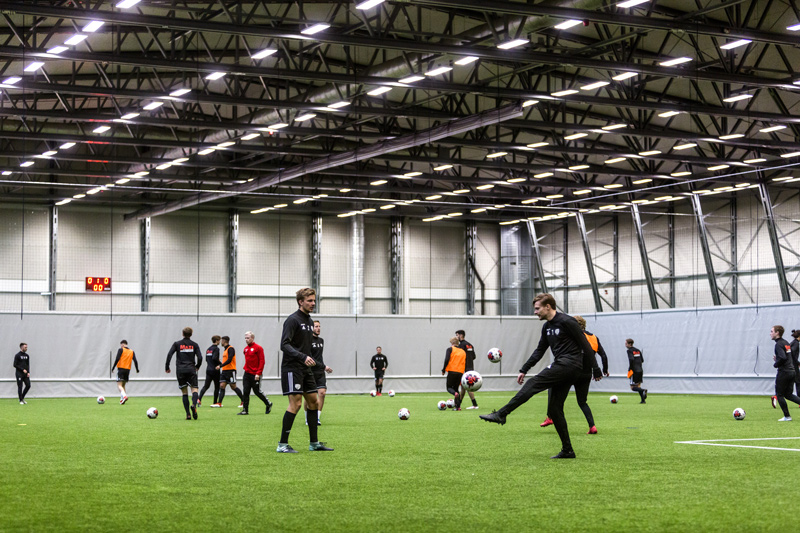